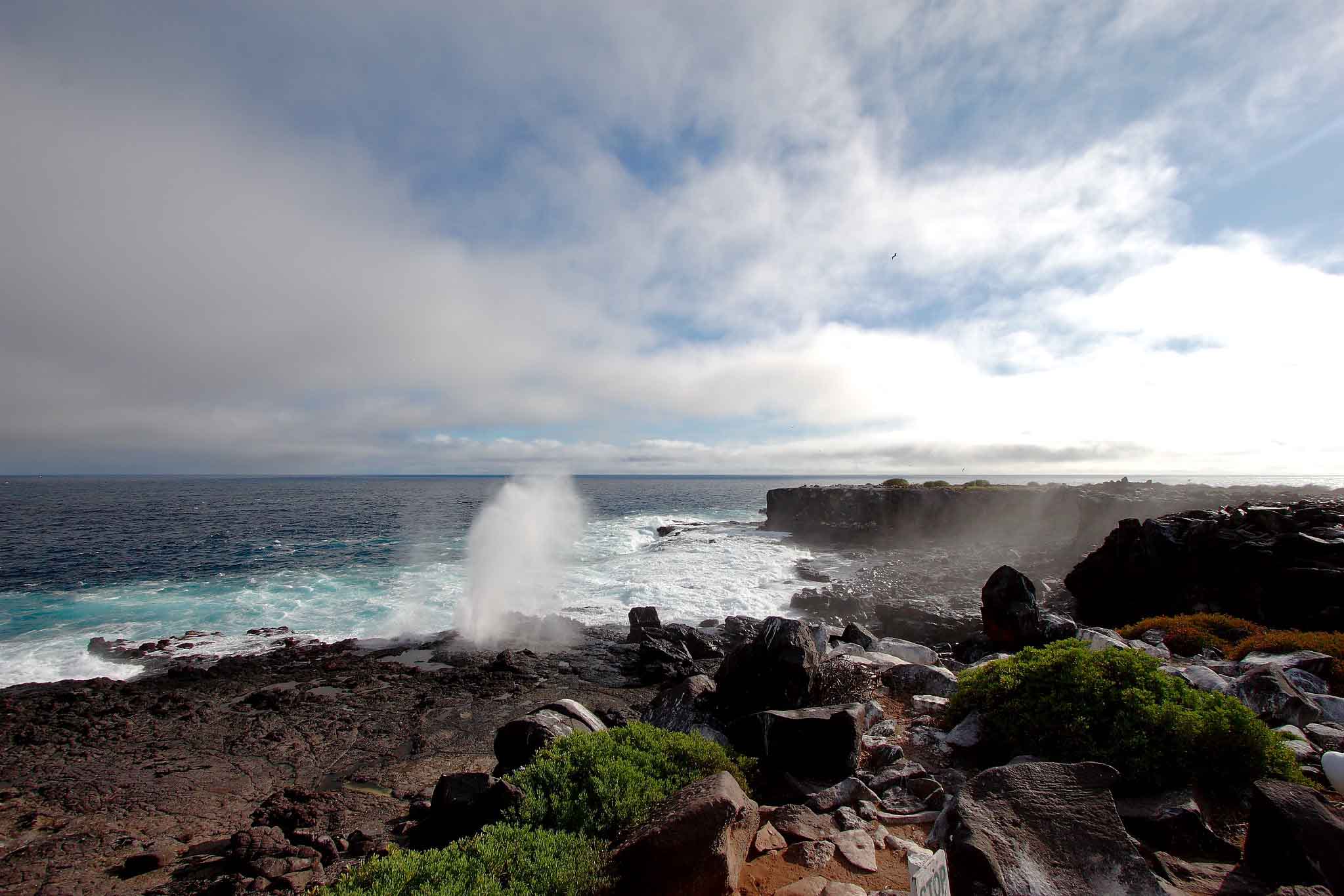 Espanola is one of the oldest of the islands. It is small and flat, with no visible volcanic crater or vent. Gardner Bay on the eastern shore offers the islands most magnificent beach. It is used by a transient colony of sea lions, and is a major nesting site for marine turtles. Around the small islets nearby, snorkelers will find fish and sometimes turtles and sharks. The trail leads from here to Punta Suarez, on the western tip of the island. Along the way you'll pass the nesting site of almost all the world's Waved Albatross, huge birds with a 6-foot wing span.

Punta Suarez is one of the most outstanding wildlife areas of the archipelago, with a long list of species found along its cliffs and sand or pebble beaches. In addition to five species of nesting seabirds, Galapagos doves and sometimes Galapagos hawks can be seen. The Hood mockingbird is very curious and bold. Several types of reptiles, including the brilliantly colored marine iguana and the oversized lava lizard, are unique to this island. When heavy swells are running, Punta Suarez is also the site of a spectacular blowhole, with thundering spray shooting 30 yards into the air.

Situated on the northeastern portion of Espanola, Gardner Bay is a swimming and snorkeling site, with a beach that faces the islet of Gardner-near-Española. You'll have a wet landing amidst a large colony of sea lions.

Many visitors stay in one location, admiring and photographing the sea lions at close range. This seems to be the logical thing to do, especially since (and regrettably) many of the Guides sit on the sand and either read a book or talk with other Guides. What happens, though, is that you could miss seeing a Galapagos hawk at close range or a pair of American oystercatchers, Galapagos doves, 3 species of Darwin's finches, the endemic Hood mockingbird, yellow warblers, lava lizards, and marine iguanas. Do as you wish, but be aware of the possibilities.

Gardner Bay is an excellent place to check out your snorkeling equipment (especially for those who flew in to San Cristobal, as this could be your first full day). Once your check-out is complete, however, the really good snorkeling is off Gardner Islet (where there are a couple of neat caves and walls covered with invertebrates) and Tortuga Rock, the islet in the distance that, oddly enough, looks like a tortuga (turtle).

A favorite of many tourists, Punta Suarez boasts the highest rate of endemism of all visitor sites. Sea lions, hawks, mockingbirds, blue-footed and masked boobies, red-billed tropicbirds, swallow-tailed gulls, waved albatross, doves, Sally Lightfoot crabs, lava lizards and marine iguanas can all be seen here. Between April and November, you can witness the unique mating rituals of the waved albatross and blue-footed boobies. The famous 'Blowhole' is toward the end of the trail.

There are so many blue-footed boobies nesting that have to take care not to step on one of their nests. You can observe red-green marine iguanas that are lying in the sun or the buzzards in the top of the trees. They hunt for young blue-footed boobies.