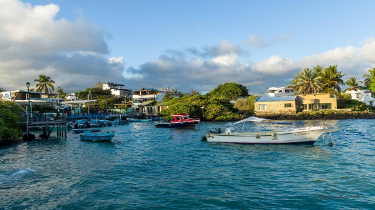 Arriving guests from Baltra Airport will be met by a transfer guide and taken on board The Beagle to settle into your cabins and have a snack before going to the Darwin Station in the afternoon. Afterwards you may stroll through Puerto Ayora’s main street with time to explore the shops.

The Charles Darwin Research Station is on Santa Cruz Island which is the main inhabited island in the archipelago, with a population of approximately 16,000. A visit to the station will increase one’s understanding of the work being done by the foundation and the importance of preserving the Archipelago’s ecosystems. A series of walkways takes you through the captive breeding program where you will see juvenile and adult tortoises from different islands.

Puerto Velasco Ibarra has the smallest human settlement in the Islands. Floreana was inhabited as early as the 1920’s and has a colorful history of pirates, whalers, convicts and colonists. You will be driven up into the highlands on a dirt road in an open-sided bus known locally as a chiva. You’ll pass through chacras (small land holdings) up to a small fresh-water spring called Asilo de la Paz and visit a tortoise corral. On returning to The Beagle you’ll motor to Punta Cormorant and from there take the dinghy to go for a snorkel at Devil’s Crown, a sunken cone with exciting snorkeling as you’re carried by the current while seeing a superb variety of marine life.

At Punta Cormorant you land on a beach with green olivine sand. Several trails allow you to explore a brackish water lagoon with a colony of flamingos who are there most of the year, and white-cheeked pintail ducks, stilts, and other shorebirds feeding alongside the flamingos. The trail then goes over a hill and dunes to a stunning white beach consisting of ground coral, where the green sea turtles nest.

Santiago Island is one of the most popular and attractive islands. The quantity and variety of wildlife here are remarkable At Punta Suarez you can see the waved albatross from April to December. Blue-footed bobbies, Nazca boobies, Galapagos hawks, Darwin finches, swallow-tailed gulls, Espanola mockingbirds, shorebirds, sea lions, marine iguanas and lava lizards are just some of its residents, and an impressive blowhole can be observed from the high cliffs.

Located on the eastern end of the island Gardner Bay has a wonderful sandy beach for swimming and observing the Galapagos sea lions.

Punta Pitt is on San Cristobal Island and affords impressive views after climbing up a steep narrow path onto a plateau surrounded by reddish hills. Depending on the time of year there may be nesting marine iguanas, red-footed boobies and other marine birds down on the cliffs.

After the visit, The Beagle will navigate to Kicker Rock where rocks rise 500 feet out of the ocean and resemble a sleeping lion, hence its name in Spanish, “León Dormido.” While you go around it you’ll be able to observe the narrow channel that separates these two rocks. Several marine bird species nest there.

The afternoon anchorage is at Isla Lobos and, as its name suggests, it has a sea lion colony and also an endemic lava lizard . It’s a good site for swimming and snorkeling alongside the sea lion pups, and on the islet you can visit the sea lion colony. Perhaps you’ll see the frigate birds displaying and building their nests, if their food supply is good.

One of the most beautiful coves of all visitor sites in the Galapagos, Santa Fe has a turquoise cove sheltered by a peninsula extending from the shore by a row of rock covered in Opuntia cactus and sea lions. This island was formed by an uplift caused by tectonic activity. You can see land iguanas, sea turtles, Galapagos hawks, sea lions, and a forest of giant Opuntia cactus, and it’s lovely to swim and snorkel in the clear turquoise blue sea.

South Plaza is one of the best spots in the Archipelago to see land iguanas and swallow-tailed gulls, both indigenous to the Galapagos. There are iguana nests scattered all over the hill. The sheer cliffs of the southern shore are a perfect bird habitat, making it an unparalleled bird observatory for especially swallow-tailed gulls, Audubon shearwaters, and red-billed tropicbirds.

North Seymour is home to several species of marine birds: swallow-tailed gulls, blue-footed boobies, noddy terns and both the great and the magnificent frigate birds compete for nesting sites. Land iguanas are found alongside marine iguanas, and there are the ever-present comic sea lions as well. North Seymour is a low, flat island located north of Baltra that was uplifted from the sea by underground seismic activity

Bartolome Island is a small island located to the east of James Island. Famous for its Pinnacle Rock, it is home to a small rookery of Galapagos penguins. You can swim and snorkel around Pinnacle Rock, or walk to the other side of the island to see sea turtles nesting (from January to March) and sharks swimming close to shore. You can also climb to the highest point of the island, a climb which gives you the chance to see plants that live in lava and ash and many interesting lava formations. On this island we also see sea lions, Galapagos penguins, pelicans, Galapagos hawks, turtles and sharks.

Chinese Hat is a little island shaped as its name implies which sits off the southeastern tip of James Island. Its small white beaches have a sea lion colony. Snorkeling is usually very good, and with luck you might see the Galapagos penguins in the water.

Located on the northwest coast of Santa Cruz Island, the visit to Cerro Dragon  (“Dragon Hill”) will take you through Palo Santo trees and Opuntia cactus past a couple of lagoons where flamingoes can be seen and the shy land iguana live.

Your visit to Black Turtle Cove is with the dinghy to permit you to motor through the mangrove inlets. These lagoons provide a refuge to rays, sharks, and sea turtles that are clearly visible alongside the boat. The engine is turned off and you slowly approach the different species that live in this peaceful place.

Your guide will take you to the airport in a bus, a ten-minute ride. Continuing passengers are not allowed to remain on board The Beagle during refueling; they can either go to the airport where there is a coffee bar and shops, or visit the small beach in the harbor