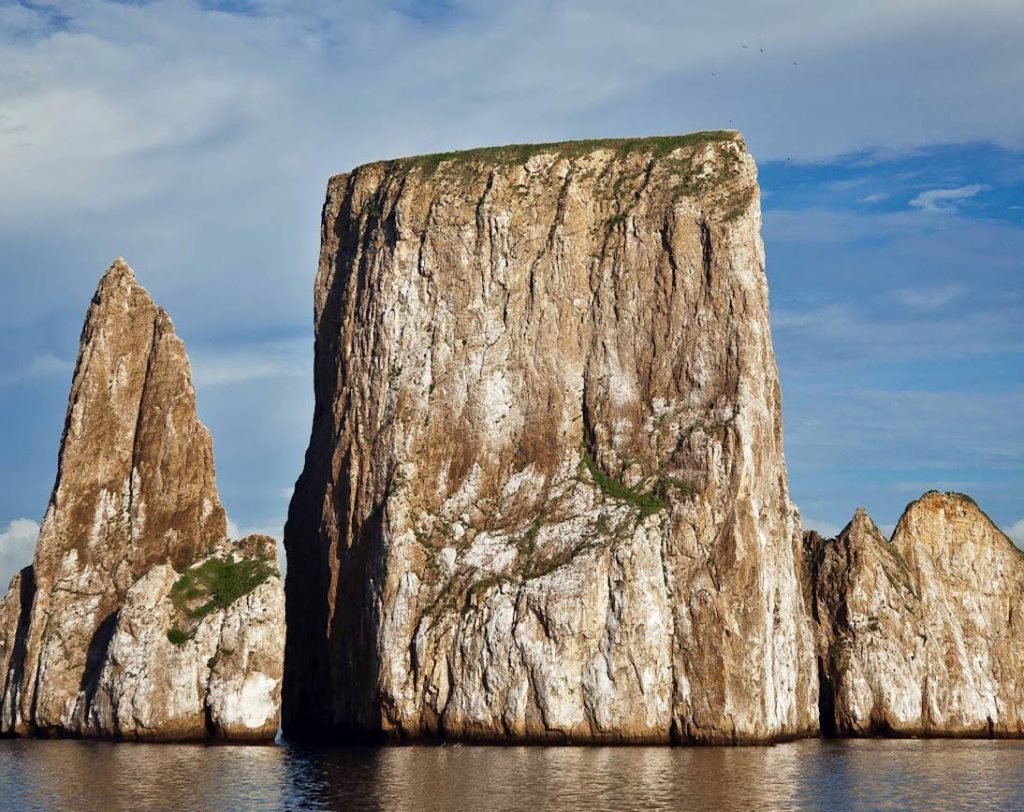 Experience an unforgettable journey with this majestic 8-days itinerary that includes visits to two must-see islands: Española and Fernandina plus other incredible and life-filled spots in the Western and the Southern part of the Archipelago. All this while cruising on board a high-end motor vessel to be part of a memorable experience.

Tuesday: Arrival / San Cristobal
Arrive by plane to the charming Capital of Galapagos in San Cristobal Island. Meet the friendly crew and settle in your comfortable cabin and enjoy a delicious welcome lunch on board.

Located on the northwestern part of Isabela, is comprised of two separate coves; the site is a wide bay with amazing sea life: Sea turtles, Seahorses and the strange “Mola-“mola (sunfish) may be spotted here. This bay is great for diving and snorkeling.

No foreign species have ever invaded Fernandina Island, and therefore it is one of the most pristine ecosystems in the World. Volcano “La Cumbre” dominates the landscape with lava fields reaching the ocean. The island’s highlight features the flightless cormorant nesting site and marine Iguanas. This area provides a great opportunity to see the Galapagos hawk.

Strategically located at the base of Alcedo Volcano on the west coast between Tagus Cove and Elizabeth Bay. This area experienced a major uplift in 1954 causing the land to rise over 16 feet. The coast expanded half a mile out leaving marine life stranded on the new shore; it is a magnificent snorkeling site.

Is located near Elizabeth Bay on the west coast of Isabela. The overabundance of birds seen during a dinghy ride along the striking rocky shores or a hike along path through lava rock leading to tide pools and mangroves create a birdwatcher’s delight. In the tide pools, pintail ducks, green sea turtles or white-tip sharks can be spotted.

The Volcano boasts the largest basaltic caldera in Galapagos at 9 x 10 km. The site offers impressive views and the opportunity to observe up to 7 species of finch and a rich display of vegetation. The north side of the caldera provides evidence of its most recent volcanic activity in 2005.

From 1945-1959, a penal colony hosted prisoners who were forced to build this wall, stone by stone, in isolation. This now historical site, towering at 65 feet (25 m) high, took the lives of thousands during its construction. Locals claim to hear cries emanating from the heavy energy surrounding the site.
The Wetlands of Isabela Island are located just outside of Puerto Villamil. The Wetlands consist of lagoons, swamps, and mangroves and are home to a variety of unique bird species such as common stilts, whimbrels, white-cheeked pintails, and gallinules. The Wetlands can be visited on foot via a path that winds through the swamps.
This center was created to protect animals in their first years of life from the threats of foreign species such as pigs and donkeys. Giant tortoise eggs are collected and brought to the center where they are hatched and kept for five years before being released to their natural environment.

Located between Baltra and North Seymour islands, this reef of rocks and coral is just 160 meters across at its narrowest width; it has one of the largest populations of sea lions and is home to many shorebirds. You can spot wildlife during the interesting dinghy ride.

In the 18th century whalers passing through the islands placed a wooden barrel on Floreana Island for use as an unofficial mail box; this tradition continues today as visitors leave addressed postcards in the barrel and sort through left mail to deliver at home.

Cormorant This site hosts a large flamingo lagoon where other birds such as common stilts and white-cheeked pintails can also be seen. It houses the “Green Beach” named so due to the high percentage of olivine crystals in the sand, and the “Four Sand Beach” composed of white coral.

Afterwards, visit to Champion Island, named after the whaler Andrew Champion, is a small island located just offshore Floreana Island in the southern part of the Archipelago, considered as one of the most beautiful places on Galapagos for snorkeling and diving plus an excellent opportunity for dolphin watching.

One of the best sites, great for spotting waved-albatrosses, mockingbirds, blue-footed and Nazca boobies. A beautiful site on the ocean front, the large waved albatrosses use the cliff as a launching pad. The famous attraction is the magnificent blowhole, spurting water high into the air. This site presents wonderful photograph opportunities.

Situated on the eastern side of the island is the breeding site of nearly all of the world´s 12,000 pairs of waved albatrosses. It has an ample white sandy beach with a myriad of sea lions, perfect for relaxing and taking pictures; its rocky shores make this site a great place for snorkeling too.

It means “Sea Lion Island.” This appropriately named island is ripe with noisy, frolicking, jolly sea lions who will welcome you to their home with open, well, fins. This island also offers great snorkeling opportunities as well as the chance to see blue-footed and Nazca boobies.

Continue to San Cristobal Airport to board your flight back to the Mainland.