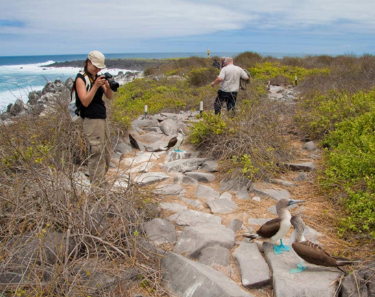 Your flight arrives at noon from Quito or Guayaquil to Baltra Airport. After lunch on board, we will anchor on the island of North Seymour; here you can appreciate the largest colony of frigate birds living together with swallow-tailed gulls and pelicans. Norh Seymour is also home to a group of large, old land iguanas that were brought here many years ago from the nearby island of Baltra. A small endemic tree called bursera malacophylla, is found only here and on three small neighboring islands.

In the afternoon you will witness a special spectacle: Sea lions surf on the big, oncoming waves from the west.

The small island of Bartolome, at the east of James Island, is one of the most photographed places in the archipelago because its pinnacle rock. This young island keeps a whole series of dramatic volcanic formations, a moon-like landscape with small tuff cones and lava tubes. The various rocks have served the pilots of the U.S. Air Force as targets for target practice during the Second World War. Bartolomé has two beaches, which are separated by a narrow mangrove belt. In the northern beach you will have the chance of swim and snorkel, there are often penguins swimming too. In the south coast live reef sharks and rays and from January to March nesting green turtles are here.

Sullivan Bay, at the east of Santiago Island, is known for its distinctive lava formations. In the evening you can once again swim in the sea or snorkel with the sea lions.

A final morning visit takes you to the Bachas beach on the north coast of Santa Cruz Island. This is one of the most important nesting beaches for sea turtles. Behind the dunes, in a small lagoon, flamingos, stilts and bahama ducks can be observed. The wide beach is ideal for swimming and snorkeling.

After lunch on board, the ship takes rate southwest. This excursion takes you to Dragon Hill, (Cerro Dragon). Here are living in the last one- vegetation land iguanas of Santa Cruz Island.

At dawn you reach the Plaza Island. It is thanks to the powerful Opuntia cacti and bright orange – red sesuvium shrubs a surprisingly colorful island where the land iguanas dominate the field. A small sea lion colony lives at the cliffs on the south coast. The avifauna offers besides the brown pelican, tropic birds, swallow-tailed gulls, frigate birds, blue-footed and Nazca boobies.

We will spend the afternoon on the island of Santa Fe. This is one of the most picturesque anchorages of the archipelago, where you can swim with sea lions and sea turtles.

Puerto Baquerizo Moreno, the administrative center of the archipelago, is at San Cristóbal. There, you will visit the newly built visitor center. It shows an excellent exhibition about the nature and settlement history of the Galapagos.

Around midday you will fly from San Cristóbal Airport back to mainland, to Guayaquil or Quito.